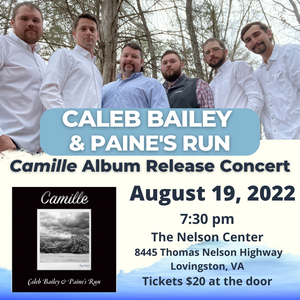 Grottoes, Va. (August 2, 2022) – Caleb Bailey is proud to announce his new album, Camille will release on August 19, 2022. Caleb Bailey & Paine’s Run will hold an Album Release Concert at the Nelson County Historical Society in Lovingston, Virginia, on the same day.

The title track, “Camille,” was written by Caleb Bailey and is based on the 1969 Hurricane Camille, which ranks as the second most intense hurricane to strike the continental United States, including its impact in Nelson County, Virginia.

Bailey worked with The Nelson County Historical Society, who provided access to countless images of the devastation from 1969 for the band to include in their new “Camille” music video edited by Fletcher’s Devine Creations. The video debuted on The Bluegrass Standard Magazine’s Top 15 Video Chart for July 2022.

Mason Via (Old Crow Medicine Show, Top 40 finalist on American Idol) heard the new album and complimented Caleb’s songwriting talents saying, “These songs are so interesting – really unique. It’s hard to find that in the lyrical content of new bluegrass music these days.”

Bailey’s impressive songwriting talents are evident from the success of his debut album, Poplar & Pine, which resulted in a #1 for the song “Grim Reaper.” The popular album featured other singles that also charted on Bluegrass Today’s Grassicana and Gospels charts. In addition, Poplar & Pine reached #6 on AirPlay Direct’s Top 50 Bluegrass Album Chart.

Caleb Bailey & Paine’s Run will perform on August 15, 2022, at the Rockingham County Fair in Harrisonburg, Virginia, and at the band’s Album Release Concert on August 19 at The Nelson Center in Lovingston, Virginia.